Lower taxes will lead to an increased deficit

As far as the end result is concerned, the cost of living in Israel is in fact higher than in other European western countries or that of The United States. The high cost of living is derived mainly from the government’s taxation policies and on our unique geographic position which forces us to transport and import most of the goods we consume on the other. I believe that the use of the recently found natural gas will in fact lower the customer price index (CPI) in the future.

However, we must look at things as a whole because in The United States for example, the consumer products are much cheaper but the  cost of education is much higher than in Israel. As a result, we can’t really compare the total package.

Obviously, there are different actions the government can take to lower the cost of living in Israel – but it is important to remember that some things, even if implemented immediately will not affect the end users right away because such things take time. The best example of such process is the upcoming port reform: This is a justified and necessary reform which should be completed as soon as possible but it cannot and will not guarantee an immediate drop as far as the prices on imported goods are concerned. 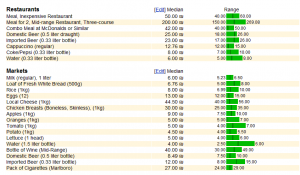 The second and most important issue we ought to consider is the shift to an energy based on the recently discovered natural gas. The reliance on the natural gas should lower the households’ electricity prices; reduce the cost of electricity manufacturing, the cost of industrial manufacturing and finally the cost of desalination. I firmly believe that this change is a far more important one than that of the port reform mentioned earlier.

The defense budget includes fixed costs that cannot be reduced

The taxation is a separate component comprising the cost of living – especially when for example the VAT embodies nearly a fifth (18%) of any given product. If the government will decide to lower the income taxes or the VAT, it would have to draw the money from other sources because otherwise Israel would face an enormous deficit.

Naturally, the defense budget represents a significant part of the state’s budget, but it seems as if we face a serious misperception having to do with the defense budget and it should be corrected: Even if we cut the costs of Israel’s regular army, the total amount of money allocated to the budget would not necessarily be reduced.

The main reason is that today’s warfare is based primarily on a technological competitive advantage while at the same time on cyber-electronic warfare. The cost of these components is on the rise with more and more resources being committed in order to gain the upper hand. These costs will not drop in years to come.