A few monthes have passed since the Bank of Israel decided to reduce the interest rate to a historic low of 0.25 percent, further to interest rate reductions prior to this move. The interest rate remained at 0.25 percent in October as well. The low rate resulted from a lack of options, as Israel witnessed a decline of tens of percent in exports and almost zero growth rate per capita. We would like to examine the pros and cons of lowering interest rates. The goal of the Bank of Israel was to create incentives for economic activity in the market, which is experiencing a decline in transactions before and after Operation Protective Edge. 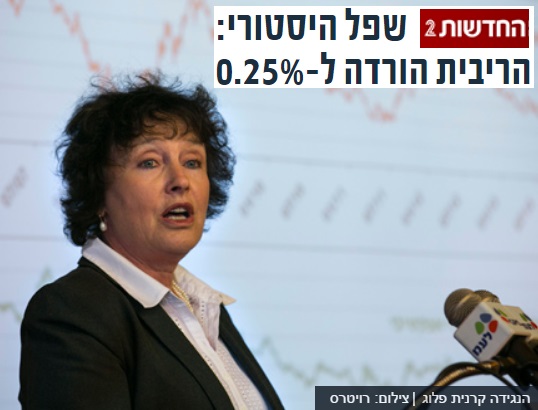 The negative consequences primarily affect the pricing of risks. Because there is ‘easy money’ and cheaper credit, it may push companies towards unnecessary investment and households to consumption, which in the medium term they cannot afford. This will certainly result in rising bond prices and a rise in stock prices as a result of a lack of investment alternatives. These behaviors may change at once, once the interest rates begin to rise again. This could lead to strong fluctuations in the stock market and even sharp declines, which would hurt investors, especially those who entered the market in recent months.

The risk associated with the decline and subsequent rise in interest rates, may lead to a collapse of the market which will also affect the real economy. This is a phenomenon which very much concerns economists and actors in the stock markets around the world. Only after the interest rate rises again, will we know if the damage done by the central banks in lowering interest rates was greater than the benefits.

It should be noted that the interest rate could also drop further to a lower level than it is today, to 0%, but that would depend to a certain extent on the processes occurring in the United States. According to estimates, the interest rate in America will rise during 2015. However, we’ve learnt from history that Israel cannot lag far behind the United States on this issue.